Research for CIR?s latest report on quantum technology, ?Quantum Computing:? Applications, Software and End-User Markets,? has given us important insights into which industry sectors will be the first commercial adopters of quantum computing and why. By ?commercial? we simply refer here to quantum computers deployed outside of the research and defense communities.? These two communities have accounted for the lion?s share of quantum computers for many years, but this is beginning to change.

CIR believes that research and defense will continue to account for a large slice of revenues from quantum computing activities.? But we are also seeing the center of gravity of the quantum computer market begin to shift towards other types of users.? In Exhibit I we show blue-chip firms across the globe that have made some level of commitment to using quantum computing. 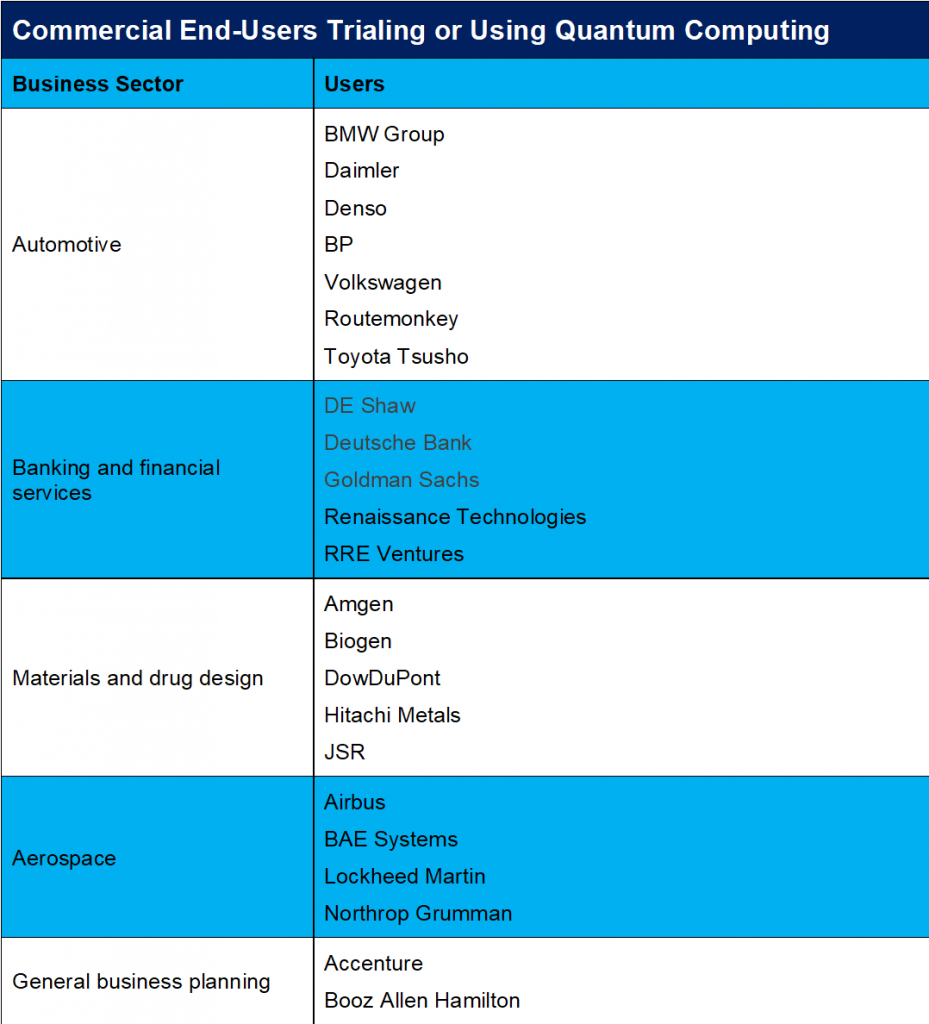 Exhibit I is only meant to show that important firms ? firms with plenty of IT buying power, in several strategic industry sectors — are already seriously into quantum computing.? For us, this strongly implies growth for commercial quantum computing in the short-to-medium term future, but it doesn?t really speak to which end-user sectors will spend the most money on quantum computing.? In Exhibit II, we show how CIR believes the different sectors of the quantum computing market will break out in terms quantum computing expenditures in the future. 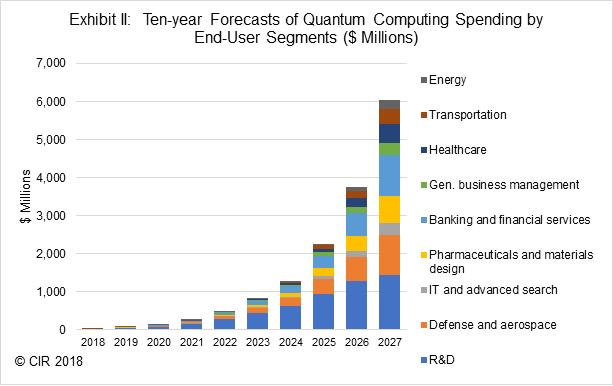 Of Secret Quanta and Financial Services

We believe that in addition to taking in account the support of big name firms as shown in Exhibit I, must consider those deployed quantum computers that no one wants to talk about.? ?Most obviously this is true in the defense community, where quantum computers are literally state secrets. (See the David Ignatius novel, ?The Quantum Spy,? for an exciting perspective on this.)

We are seeing such ?secret? computers in the banking and financial sectors too.? At the big banks, hedge funds and so on, the quants are already devising quantum algorithms that they believe will give them measurable competitive advantages.? When one is dealing with trillions of dollars, a $10 million quantum annealer that can squeeze out a one or two percent advantage is worth it.

In assessing the likely expenditures on quantum computers by specific industry sectors, one also has to take into consideration each sector?s level of seriousness about quantum computing deployments. Trials can be fascinating, but there needs to be a compelling business case and a willingness to integrate quantum computing into the corporate IT infrastructure for large revenues to be generated.

Quantum computers build business case in big pharma: To illustrate this, consider the materials and pharmaceutical design end-user sector.? The pharmaceutical industry is dependent on a stream of new drugs, but providing this stream appears to be harder and harder to accomplish ? the days of blockbuster drugs appear to be over.? It is widely acknowledged that the discovery of novel drugs, will take lots of raw computing power and CIR therefore expects quantum computers to be deployed to the drug discovery front relatively quickly. ?IBM and Microsoft, for example, have specifically said that this application will be the first applications where quantum computing services and software will be sold.

Currently it takes pharmaceutical companies more than ten years and often billions of dollars to discover a new drug and bring it to market.? In this financial environment ? as with the financial sector ? it is quite easy to build a business case for a high-priced piece of equipment, such as a quantum computer, if it can enable the drug firms to speed up the drug discovery process and also reduce the number of drugs that prove to be failures when put into trial.? Advantages to the patient include more accurate drugs and the potential to treat more diseases.

All these factors contribute to the case for quantum computers in the pharmaceutical industry and we are already seeing efforts to use quantum computing for designing new cancer and neurological drugs. In the latter case Biogen is trying to improve pharmaceuticals for neurological and neurodegenerative disorders by exploring quantum computing technology for chemical simulations. In these efforts, it has teamed up with Accenture Labs and 1QBit.? The objective of this project is to improve the fidelity of the molecule comparison modeling process.

Comparing business cases: Something very similar is happening in the specialty chemical industry where similar thinking is leading firms to start thinking about using quantum computers for building new polymers and smart materials.? Once again, it is not hard to make the case.

By contrast, it is harder to see immediate revenue streams flowing from other early quantum computing trials.? For example, at the recent Q2B quantum computing business conference there was a fascinating presentation on the work Volkswagen is doing in big cities around the globe to simulate quantum computer optimization of traffic flows.

Obviously, if such a scheme can be realized, it will not be hard to build a business case for it, certainly in terms of cost savings and maybe even in terms of revenue generation.? But so much infrastructure needs to be built, so many sensors installed, so much legislation passed, before this kind of quantum computer deployment can happen.? In CIR?s opinion the path to money making with drugs and advanced materials is much simpler and closer to reality because it doesn?t deviate that much from what is already being done with supercomputers in big pharma and the specialty chemical space.

Towards a bottom line:? There is growing understanding that a business is emerging from the esoteric world of quantum mechanics.? Quantum computing, quantum networking, quantum encryption and quantum sensors are increasingly seen as money spinners by Tier 1 venture capitalists.? The term ?the quantum Internet? ? still not well defined ? is being bandied around by both computer trade magazines and the general business press.

In the case of quantum computers, we can point to dozens of firms that have made public announcements of quantum computers being considered for in their businesses.? As we have indicated, CIR thinks that there are other commercial users too, but that they aren?t standing up to be counted because they regard their development of quantum computing solutions as a trade secret.